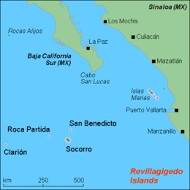 The territory as being situated in the convergence of two oceanic currents, it is a meeting point for many migratory species such as sharks, whales and turtles. Additionally, it is home to 366 fish species, of which 26 are endemic species. Mexico’s President Enrique Peña Nieto in his speech while signing the decree stated that these actions will contribute to increase the number of species and will help restore the marine life that has been affected negatively by the environment and human activity.

The National Park Reserve Council declared that all commercial and sport related fishing is completely prohibited in the territory as well as the construction of hotels in the islands and the extraction of natural resources. Only scuba diving is permitted with certain restrictions. The National Park is controlled and monitored by the Mexican Ministry of Environment and Natural Resources and the Mexican Navy.